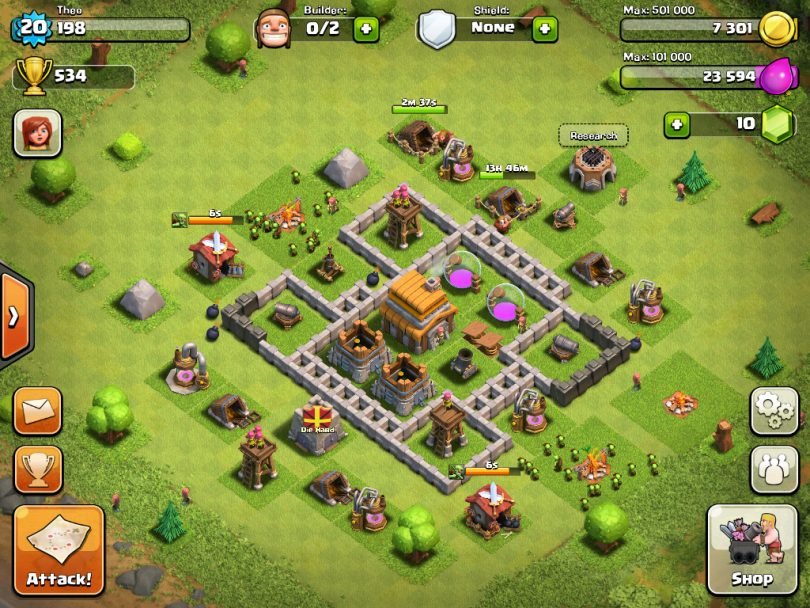 So you’ve just started playing Clash of Clans and want a defensive strategy and/or to accelerate your leveling and army strength?  I’ve taken some notes during my time playing and will share below the strategies I have developed to do just that.

UPDATE 4.12.14: Check out recent Clan Wars post with a broad overview and some high level strategies for Clan Wars.

Builders build and upgrade your structures, making them the most important unit in the game.  Having more Builders allows you to build or upgrade multiple structures simultaneously, one per Builder.  In order to maximize your gaming experience, you’ll want to decide early as to how many Builders you’d like to command throughout your game.  It’s important to note that without paying cash you’ll only be able to command up to three of five available Builders.

At the beginning of the game, you start with one Builder.  Shortly into the tutorial, you’ll be asked to purchase a second for 250 gems.  After the tutorial, you’ll want to hire a third Builder, but will find out that the cost has gone up to 500 gems.  Gems are hard to come by, most players will eventually be able to save enough to buy a third Builder (500 gems), and some very conservative and veteran players a fourth (1000 gems), but a fifth Builder(2000 gems) is only available to those who pay cash.

I opted to purchase 1200 gems for $9.99 and hired four of five Builders just a few days into my game.  So again, if you determine you’d like four or five Builders early on, do yourself a favor and front the $9.99 or $19.99 early so you can take full advantage and power-level your town.

My rule of thumb when upgrading storage is to always ensure your maximum Gold and Elixir capacities are enough to upgrade your Town Hall (Gold), and research the most expensive upgrades in the Laboratory (Elixir).

Your first goal in scouting an enemy camp is to identify an opponent with a respectable amount of the resource you desire.  As your army grows and units become more powerful and expensive, what you deem respectable will change over time. Early on I would consider raiding anyone with 5,000 or better of a resource, now I’m looking only at players with 100,000+ of my desired resource.  Once you’ve found a suitable camp, the next step is to survey their defenses.

Mortars are the most lethal defenses at early stages of the game and should be your primary target.  If  there is easy access to their Mortar, continue surveying the land.  Can you pick off the Mortar quickly without too much of a loss?  How many Cannons and Archer Towers are within reach?  How many walls must you get through in order to reach their Gold and Elixir storages?  Are any of their defenses being upgraded that would make an easier target?  These are all questions that you’ll need to answer in the short 30 seconds before a match begins.

Archers are great resource gatherers because they attack from a distance.  You can often find players with Elixir Collectors and Gold Mines beyond the range of Mortars, Cannons, and Archer Towers.  This is a perfect opportunity to drop an Archer to scout for traps and range detection, and once confirmed, drop a few more to snag some easy resources.

This strategy can quickly lose you trophies, thus limiting the available resources from your enemies as you rank lower and lower overall.  By balancing your wins and losses, however, you should be able to raid one enemy after another with little training time in between while you steadily stockpile your resources for your desired building or upgrade.

Prior to my Laboratory, Barbarians, Giants and Archers were staples.  I’d keep 4-6 Giants, 10 Barbarians, and the rest Archers in my Army Camps, with the occasional Goblin pack and Wall Breaker or two.  This was easily enough to boost me to 400+ Trophies.

Post Laboratory and after reaching level 2 Barbarians, Archers, Goblins and Giants, I kept 5 Wall Breakers, 6-8 Giants, 10-15 Goblins, 10-15 Barbarians, and the rest Archers (30-45 depending on Army Camp quantities and levels).  This unit combination is extremely flexible up to about 900 Trophy enemies.  Much higher and you have to browse through two dozen or more enemy bases before finding a weak opponent worth raiding.

Take advantage of the enemy if their Town Hall is exposed.  Destroying only their Town Hall nets you a win and a few Trophies.  Another opportunity is when most of the enemy defenses are in the middle defending their storages, leaving their Army Camps, Builders’ Huts, Barracks’,  Gold Mines, Elixir Collectors, Laboratory, Spell Factories, Castles, and Air Defenses exposed.  Take the majority of those buildings out and you’re easily past 50% destroyed, and a win.

Another strategy used when wishing to preserve your resources overnight or for several hours is to leave your Town Hall exposed so a player destroys it, and perhaps a few surrounding buildings to give you a shield for 8-11 hours.

As for a defense strategy, your priority should be to protect your Mortar while allowing it to reach/protect as many other buildings as possible.  Do this by placing it near the center of many target buildings, Archer Towers, and Turrets, putting it inside a wall, and if possible, inside two walls.  You should also try to allow Turrets and Archer Towers’ range to overlap and defend one another.

Below is an example of an average early defense strategy – wall your town, placing several defensive units within their own walls.  The problem with this is that there is only one wall to break through to get to the Town Hall, Elixir Storages and Gold Storages. 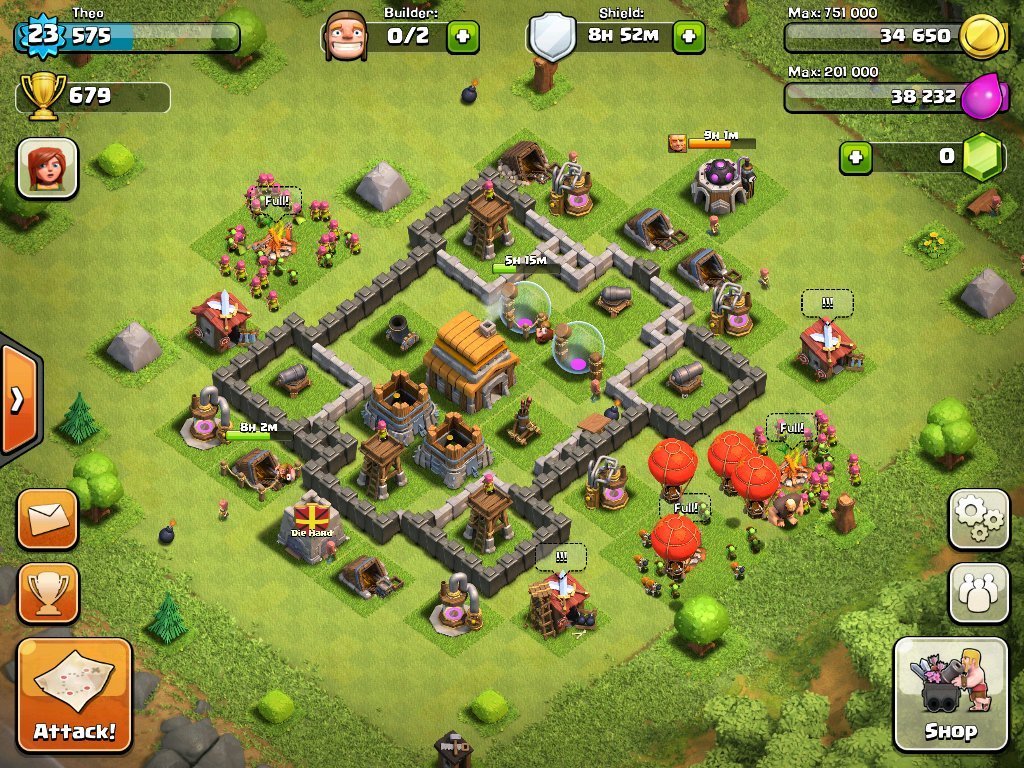 Now, let’s take a look at a better example Clash of Clans defense.  Below you’ll see that the Town Hall, Elixir Storages, Gold Storages, and Mortar are all behind two walls.  While this could be improved, this will ward off attackers with more success than the above. 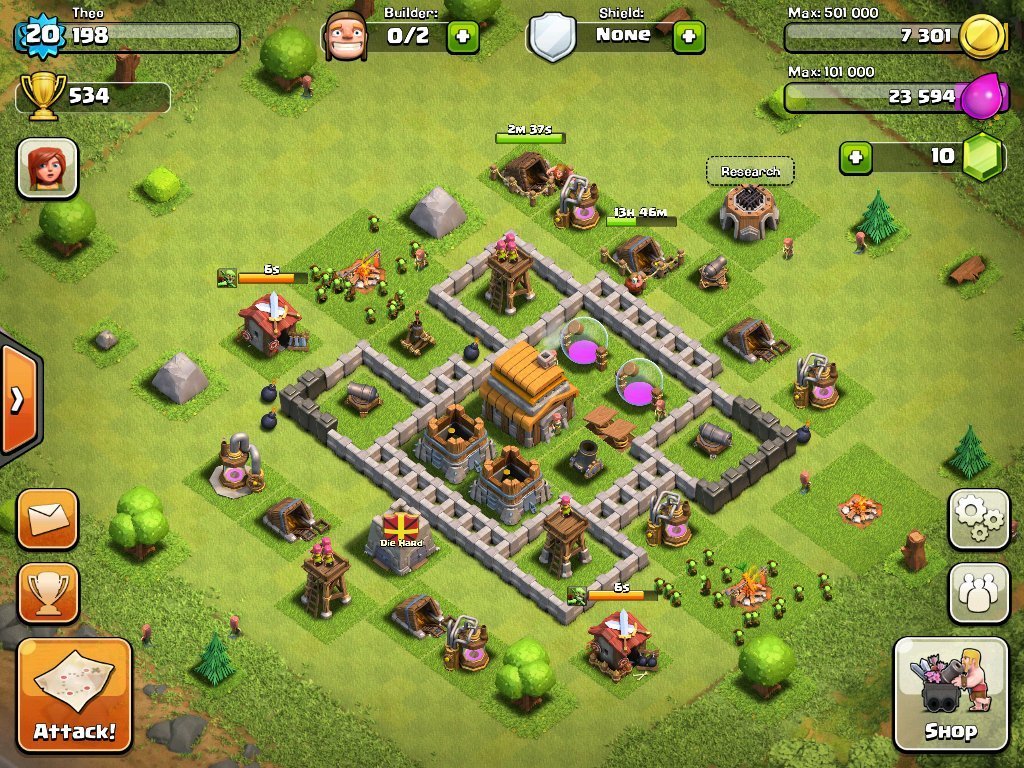 Much of Clash of Clans is trial and error, but hopefully what I’ve mentioned in this article will give you some fresh ideas and put you ahead of others in your clan.  Keep at it, and once you’ve hit about 800-1000 trophies, you’re probably ready for the Clash of Clans Strategy – Intermediate.

Until then, good luck and have fun!

Below are a few other examples of early defensive strategies that you can consider. 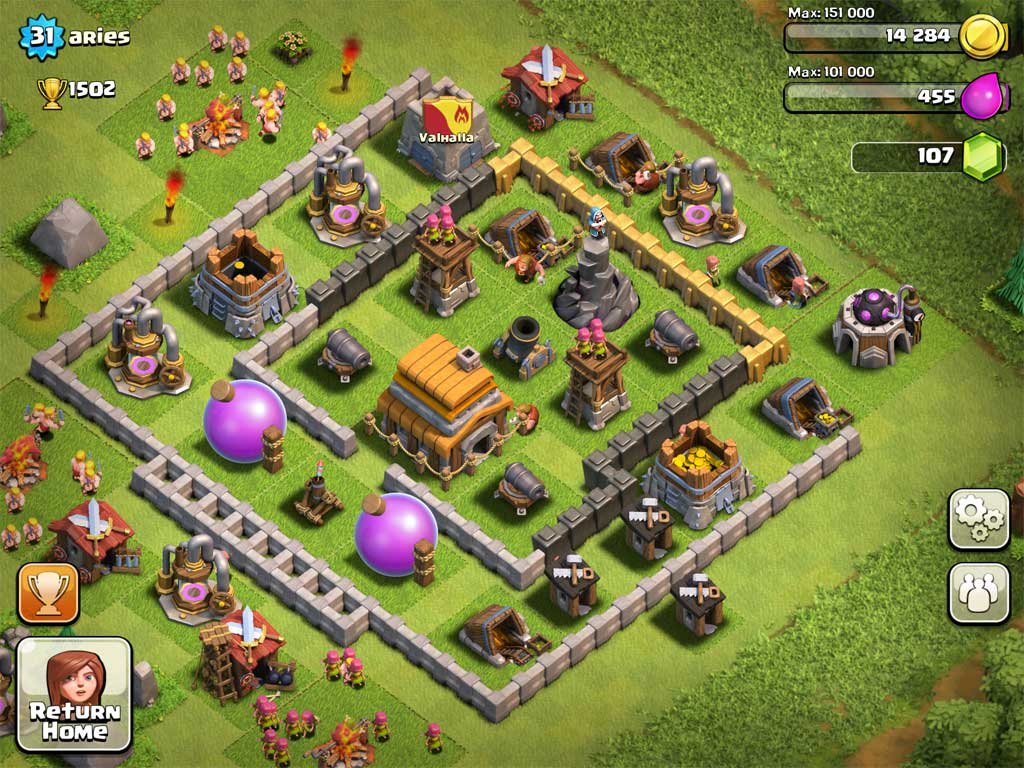 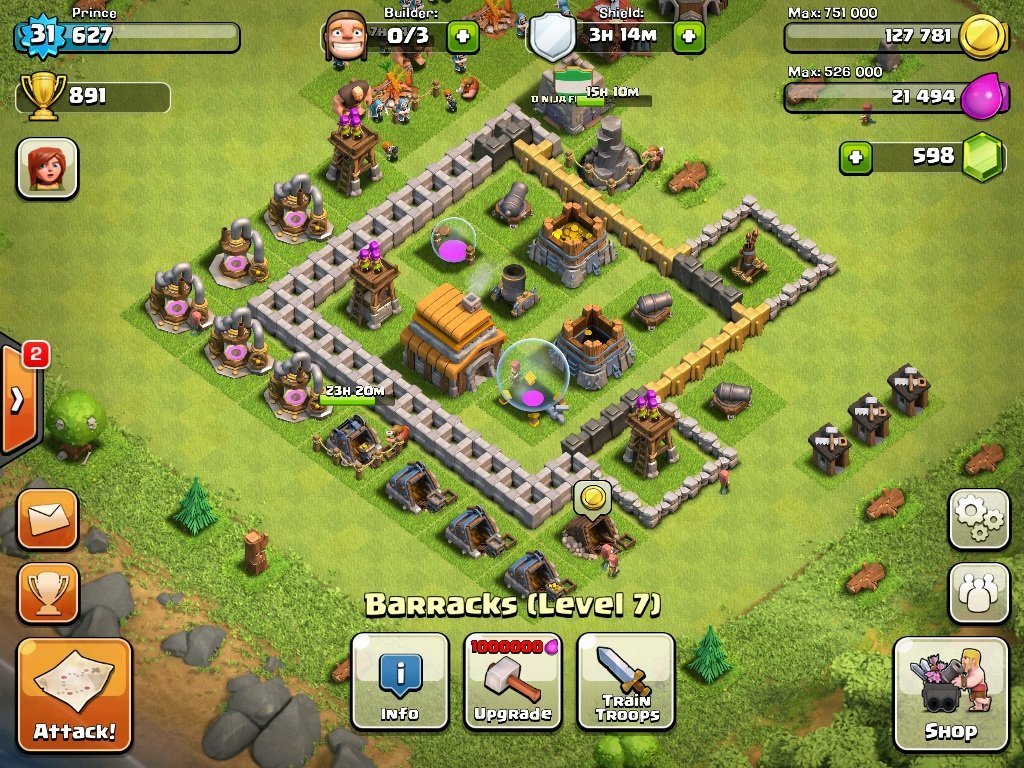 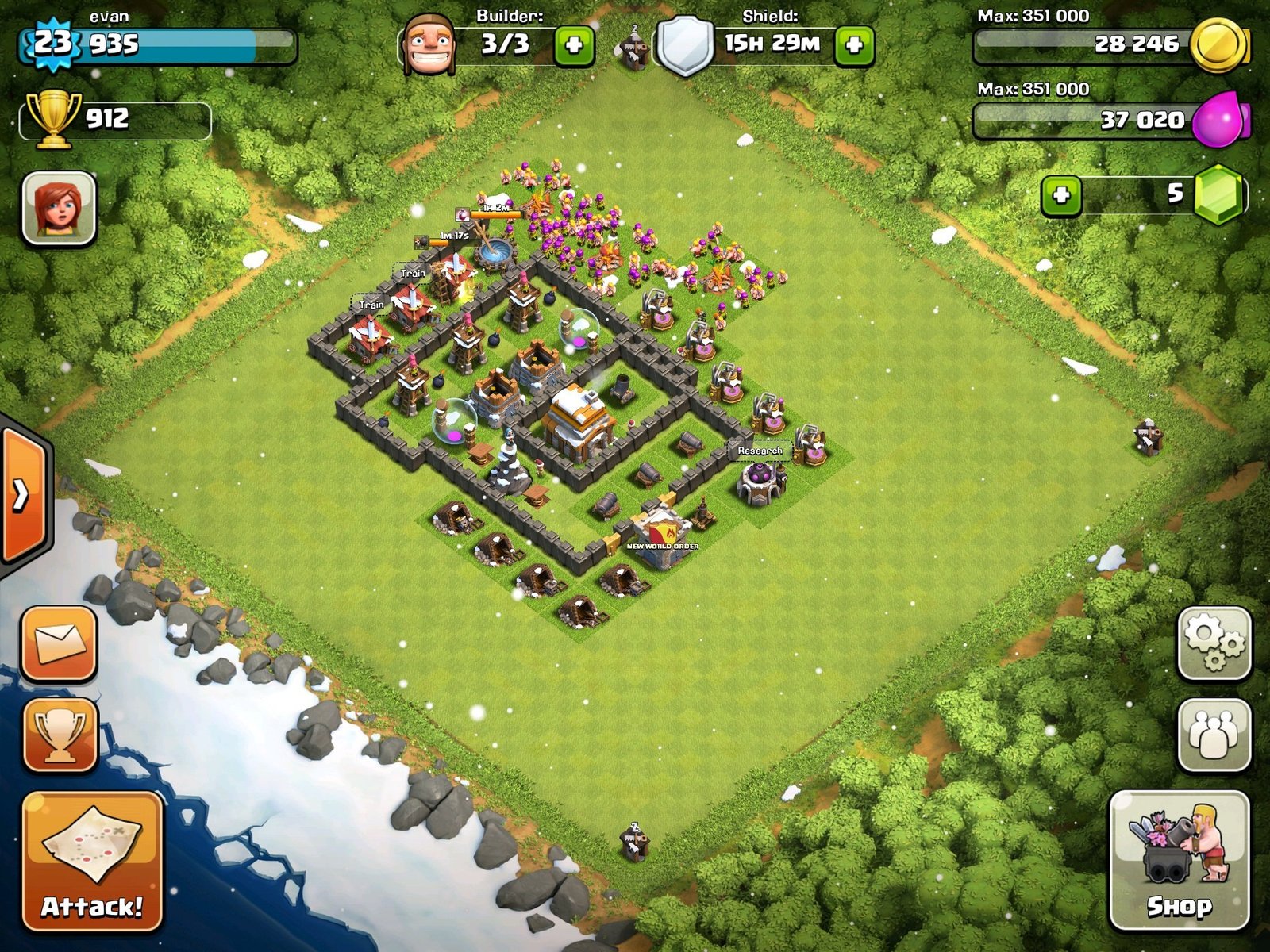 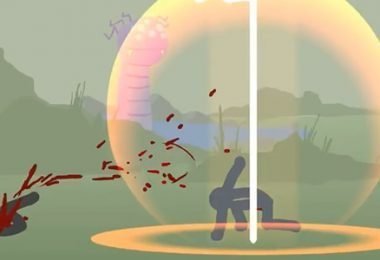 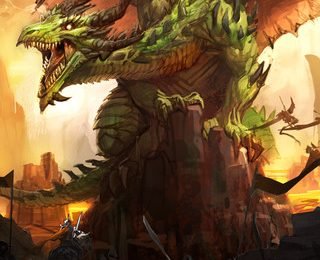