Riot recently posted a link on Facebook to a well-written article and several infographics concerning neutral monsters in the League of Legends Summoner’s Rift map.   For those of you that play the “jungler” role, this is a wealth of information.

I’ve posted the infographics below and would love to hear your own summary of how you can use this information to improve your League of Legends play. 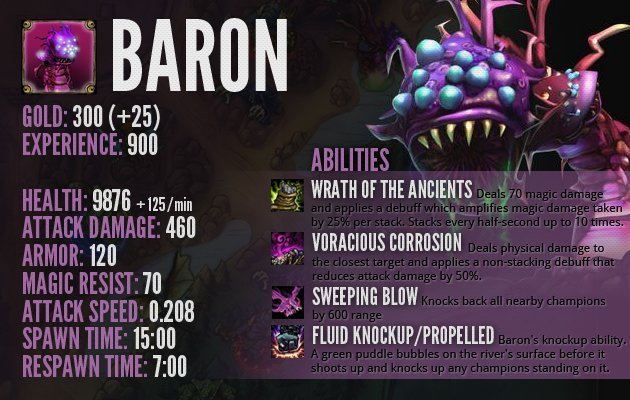 Looking at the above infographic, there’s a lot I didn’t know about Baron.  Baron has his own set of unique abilities and health that scales over time – smart scaling on Riot’s part.  Now knowing this, I’m inclined to attempt an early Baron for the flat 900XP – a huge boost and advantage over your enemies mid-game; not to mention his buff. 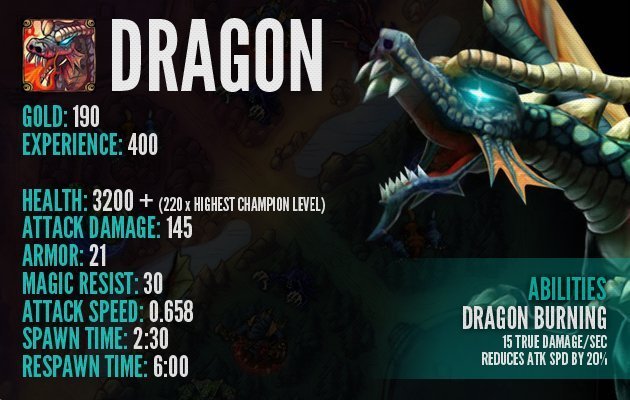 Like Baron, Dragon’s health scales over time, but against the highest champion level.  His ability, Dragon Burning, doesn’t scale as well, making Dragon easily solo-able mid to late game by high DPS champs.  The 20% attack speed reduction, however, is felt no matter when you attempt him.  190 gold and 400 experience make this a must for teams wanting an edge against their opponents.

The Ancient Golem (blue buff) is a highly-desired target for junglers and is often needed to sustain DPS and speed in clearing the jungle.  Most mana-equipped junglers will start here, requesting a leash, or a first hit on the Golem, to distract him and his Young Lizard minions while the jungler attacks and kills him.  This allows the jungler to take less overall damage before moving to their next target.

What this infographic is missing is the health and mana bonus granted to its killer.  Immediately upon death, the champion receives a small amount of health and mana.  In addition to this bonus, the champion is granted the “Crest of the Ancient Golem”, or “blue buff”, granting bonus mana and energy regeneration for 2:30 (3:00 with the Runic Affinity mastery in the Utility Mastery tree), and 20% cool down reduction (CDR).

Should the champion carrying the blue buff be killed by an enemy champion, the blue buff is transferred to their killer.  What I’m not sure of is if the killer receives only the remaining duration of the buff, or if it is refreshed to its maximum, 2:30.

In particular, the Red Buff provides an improved success rate for early ganks, or ambushes in one of the three lanes found on the Summoner’s Rift map.  A gank can allow a team to outnumber their opponents and land a kill, or even First Blood.  First Blood is an event available once per game, awarding the player landing the first kill a bonus 400 gold to the killer and additional gold to assisting champions.

The Double Golem Camp, if killed efficiently, can provide a jungler or lane a slight advantage over the enemy team.  Golems respanwn every 1:00 and are an easy kill.  If your jungler is ganking another lane and won’t be back in 1:00, push your lane to the enemy turret and go grab Golems before returning to your lane.  The Large Golem grants a small amount of bonus health and mana upon death, allowing players to replenish some resources before returning to battle.

The Wolf Camp is often the first neutral monsters killed by the jungler, with the help of their teammates.  The Giant Wolf grants a small bonus to health and mana.  Focus down the Giant Wolf first, as he deals the most damage, finishing with the two Lesser Wolfs.  Because wolves are melee monsters, ranged champions have a slight advantage because they can kill a wolf or two before the others reach them.

The Wraith Camp is home to four ranged, neutral monsters.  Upon killing the larger Wraith, champions are granted a small bonus to health and mana.  The Wraith Camp has the fastest respawn time at :50 seconds, and can easily be farmed by the jungler or mid-lane champion.  Take advantage of this to gain a small advantage over the opposing lane and team. 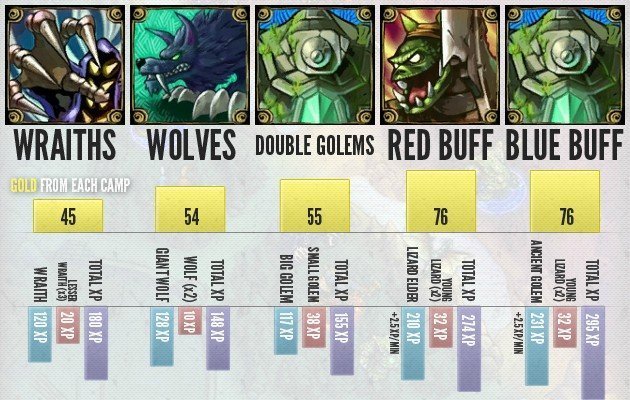 Here is an infographic that sums up the various camps in the jungle by gold and experience (XP).  It appears The Wraith Camp gives additional XP, while The Wolf and Double Golem Camps give more gold.  Of the tougher camps, The Ancient Golem has a clear XP advantage and might make a better early target than The Lizard Elder.

There’s a lot covered in these infographics and I praise their author, DiffTheEnder, for the time spent gathering this information.  As he states in his article, “All About: Neutral Monsters“, the League of Legends Wiki is wrong in several instances.  I just hope he adds my observation of bonus mana and health upon killing the elder neutral monsters credits me. 🙂

Also, DiffTheEnder has assembled a high-resolution wallpaper (1920 x 1080) with a summary of Baron Nashor’s abilities and statistics.  Click on the image below to load the full-size.  GLHF! 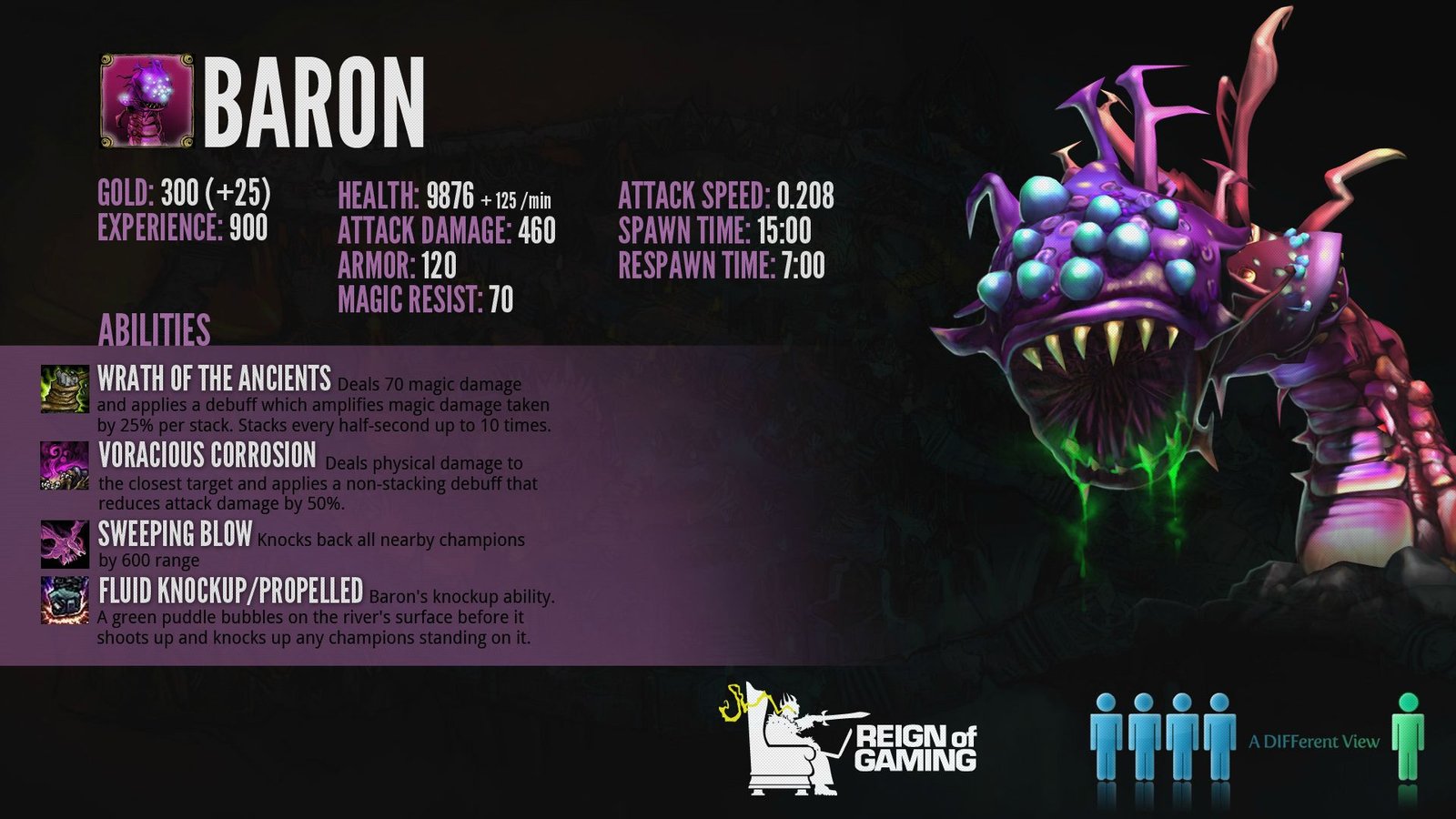 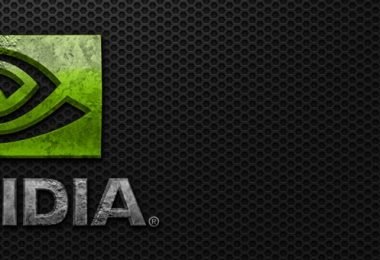 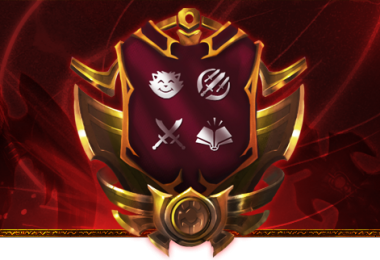